RAWing with Stephanie Perry Moore  Tell me how you got started writing, in particular writing for teens. I know you’ve published also for children and adults, but what is it END_OF_DOCUMENT_TOKEN_TO_BE_REPLACED

Locked  Out Literature   My new series Locked Out focuses on a teenager who has an incarcerated parent.  Each book concerns  a different type of incarceration: county jail, short-term workhouse, END_OF_DOCUMENT_TOKEN_TO_BE_REPLACED

Start by telling us a little bit about your background in the YA world.  How did you get involved in YA literature? DG: While working on my PhD at Syracuse END_OF_DOCUMENT_TOKEN_TO_BE_REPLACED

An annotated list of novels featuring characters in, or recently released from, a secure detention facility or residential placement.  The list contains only realistic novels (so no Maze Runner) set END_OF_DOCUMENT_TOKEN_TO_BE_REPLACED

Just over twenty years ago, I served four terms on the Young Adult Library Association’s Recommended Books for Reluctant Readers committee, now called Quick Picks.   The committee had evolved from the “hi lo” committee to focusing more on titles written for the general YA audience but with appeal and accessibility for the reluctant teen reader.  Ten years ago, I co-wrote a book about connecting with reluctant teen readers filled with tips, titles, and tools.  Now, it is spring 2015, and I just had five reluctant reader titles in a series called Locked Out published by Darby Creek, an imprint of Lerner Publishing. So, what I’m saying – other than I’m really frickin’ old – is that I’ve been around this issue for a long time.  In this blog – which I’ll write on Monday nights instead of watching WWE – I hope to share what I’ve learned, still learning, what I’m writing for reluctant readers, but also and what others know by reaching out to fellow authors, as well as YA lit professors, librarians, teachers, and others.  So, tonight, in this very blog..let’s get started with a Power Point about reaching reluctant readers that I recently updated for a presentation at the Keller YA Book Festival. It is filled with tips, tools, and quotes from authors such as Alex Flinn, Gail Giles, and R.L. Stine. 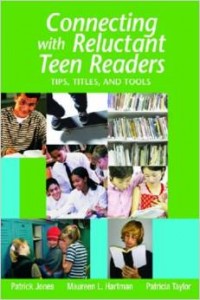